We have three words for you, Robin Benway: Launch. Yo. Self.

As you know, Mandee (Vegan YA Nerds & The Book Manicurist) and I do regular package swaps. Not only does she send me the latest and greatest Australian YA, she goes to a ton of events and gets them signed when she can. My autographed copies of Quintana of Charyn and Night Beach have their own special shelf. Next to my heart. For our next swap, I got The Reece Malcolm List autographed at Amy Spalding's launch. I also bought a few more books but was disappointed that there was only one hardcover since hardcovers aren't sold Down Under. Mandee had Also Known As by Robin Benway on her wishlist, so I preordered it and was ready to send her package out after AKA's release on February 26th. And then I remembered seeing Robin at Amy's launch and checked to see if she was also doing an event in LA. I forget that not all authors live in Australia or Portland and some are even LA based. After seeing a bunch of authors come out to Amy's launch and hearing Noelle's disappointment that no one comes out to Orlando, I decided to really make an effort to go to events, especially for local authors. Cue Tupac's To Live and Die in LA.

Anyway, now that I've rambled on about everything except Kafka's Motorbike, onto the launch! 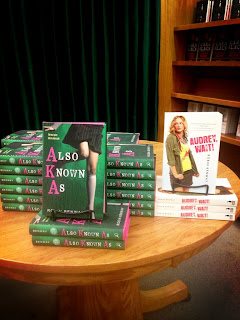 Vroman's is a huge independent bookstore in Pasadena. It's been a while since I'd been there. I think the last time I was there, I bought a Haruki Murakami book to impress a boy and I ended up detesting both book and boy. There's a section upstairs for events, conveniently located across from the huge YA section. I got there about 10 minutes before the event -- yup, early again!

Robin came out and the first thing I noticed was that she has great hair. Like, amazing, Tami Taylor hair. The main character of AKA is also named Maggie so obviously we're meant to be best friends. 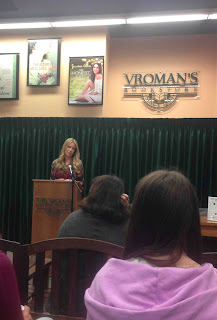 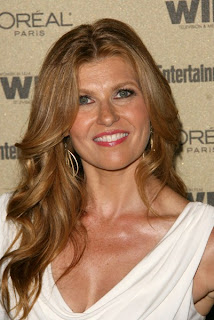 Robin read an excerpt from the book and then opened it up to questions. First, she had to give a very sweet shoutout to her mom and brother, who were in the audience, and she said she dedicates all her books to them. Her brother especially was really supportive when she decided to leave her well paying but monotonous job to write. Robin also recorded the audiobook for AKA and said Angelo is meant to be British ("sounds like James Bond and looks like Tim Gunn"), but she didn't dare try a British accent for the audiobook. Thank Madonna. The character of Roux is from her second manuscript, which her publisher passed on and remains unpublished.

The idea of AKA came to Robin when she got locked out of her storage unit. She couldn't remember the combination to the Master Lock so she googled. A few minutes later, her storage unit was unlocked and a book idea was born. Robin recently went on a high school and library tour with Megan Miranda and Yelena Black (her blog post), and she told the high schoolers how her story idea originated. So yeah, if there's a rise in lock picking at high schools... She set the story in New York because she loved her time there while attending NYU. Gramercy Park, the private park accessible only to residents with a key, is where Maggie picks her first lock.

As part of her research, aside from breaking and entering into her belongings, Robin contacted safe crackers to ask them questions about the job. All of them refused to divulge any information. Whatever, we've all seen The Italian Job.

SEQUEL NEWS: There is going to be one! Robin is working on edits right now and it should be released January 2014. She'll be recording that audiobook as well. She said the story came together much easier for the sequel than the original and she enjoyed revisiting the characters.

I mentioned seeing Robin at Amy's launch and Amy was here for Robin's. I also met authors Brandy Colbert, whose novel Pointe (release: 2014) sounds all Black Swan and awesome, and Aaron Hartzler, whose memoir Rapture Practice will be launched at Barnes & Noble at the Grove on April 9, the day of its release. Author Abby McDonald and her British accent were also there. I love how supportive the authors are of one another, and after just two events, I'm already starting to recognize familiar faces. Cue California Love.

A note on Vroman's policy for events. I am all for supporting authors and bookstores, especially independent bookstores. I bought AKA before I knew about the event, but I figured I would buy Audrey Wait and another book I need at Vroman's. However, when I got there, I was told that in order to get a ticket for the signing, I would have to buy another copy of AKA. I asked if I could buy another book instead and said I would buy 3 books in total, but I was shut down. I texted Flannery from The Readventurer since I know Flann goes to a ton of events and asked if that was the usual policy. She said no and that if you're required to make a purchase, you're allowed to at least choose what you buy. That was also my experience at the Once Upon A Time bookstore when I went there for the Summer Lovin' Tour last year. Luckily, Amy Spalding came to my aid and used her ticket to get my book signed as well. Thank you, Amy! And to Vroman's:
Posted by YA Anonymous at 4:22 AM