Reynje of Wordchasing takes us on a tour of Dan Cereill's Melbourne. Look at all the gorgeous pictures, which Rey takes herself! This is the first post in her YA Guide to Melbourne series.

Inkcrush is such a treasure trove of Aussie YA. Nomes has a recommendation list that I refer to constantly. She also has a fantastic interview with Fiona Wood. Originally given in 2010, Fiona talks about her second book (which was called Pulchritude then) and a possible US release of Six Impossible Things. Three years later, both are happening and I couldn't be more thrilled. Fiona also shares her YA recommendations. Speaking of her second book though...

Look at all these links lying around...

Wildlife, one of my Most Anticipated Books of 2013, finally has a cover! And a blurb from Melina Marchetta!! 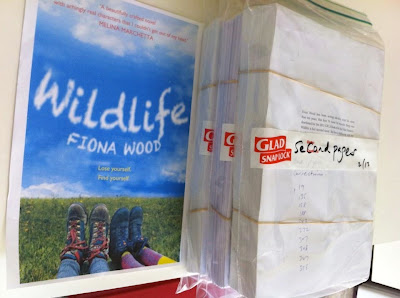 The cover was posted by Fiona on her Twitter. Melina's blurb says, "A beautifully crafted novel with achingly real characters that I couldn't get out of my head."

There wasn't much information on Wildlife when we posted our Most Anticipated list, but we finally have a blurb via Publisher's Weekly:


It’s the story of two teen girls – one still reeling from the death of her boyfriend, and the other, the reluctant model for a new ad campaign who is trying to figure out who she is and who she wants to be; they meet during a semester in the wilderness and learn about friendship, loyalty and love.


I know I'm excited. Wildlife will be released in Australia on June 1, 2013 according to her publisher's website, and in the US in the summer of 2014.

In other cover news, Vikki Wakefield's Friday Brown (reviewed by Noelle) has a UK cover. Vikki shared it on her Twitter. It will be published by Hot Key Books on July 4, 2013. What do you think of the new cover?

How does it compare to the original (on the right), designed by the incomparable WH Chong?  According to Vikki, a US cover already exists. 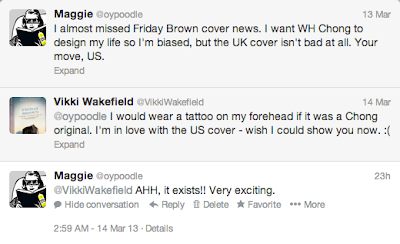 Friday Brown will be released in the States as Friday Never Leaving by Simon & Schuster Books for Young Readers on September 10, 2013.

Continuing with the Aussie invasion -- is it an invasion if it's welcomed with open arms? -- Simmone Howell's Girl Defective, another of our Most Anticipated Books, was sold to American publisher Atheneum and will also be released in the US.

I'm in love with this cover so I'll be curious to see how Atheneum changes it. Did you notice the slight tweak Pan Macmillan Australia made to the final cover (on left)?

Alpha Reader recently interviewed Simmone about Girl Defective, and I can't find out what the animal heads mean.