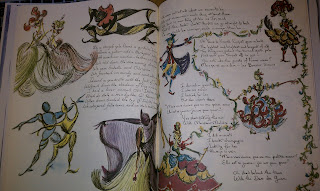 I checked this book out of the library so many times I hoped my librarian would pull a Beauty and the Beast move and insist I just keep it. I even had my "But sir! ...Thank you. Thank you very much!" ready. Sadly, life isn't a Disney movie. I ended up getting the latest Rizzoli edition from Amazon for $10 in 2008, but it was clearly a used copy and I've been kicking myself ever since for not buying a new copy for $20 more.

So what is this book about? One Special Summer was Jackie and Lee's scrapbook of their trip across Western Europe right after Lee's graduation from high school. This wasn't written in hopes of getting published but rather as a thank you to their mother, who preferred homemade gifts. Jackie and Lee compiled a handwritten scrapbook of their various adventures, with illustrations and poetry by Jackie and descriptions and summaries by Lee.
The first edition was published in 1974, after Jacqueline Bouvier had become First Lady Jacqueline Kennedy and then Jacqueline Kennedy Onassis. In the prologue of the Rizzoli edition published in 2006, Lee Bouvier Radziwill wrote,

This was an ode to discovery, youth, and adventure by one very young.

Flipping through these pages, I understand why my mom always harped on me about keeping a diary. Of course I didn't listen, but I wish I had, especially when I think back to my first trip to Europe. When I went to live in France, I kept this book in my mind and forced myself to journal. I didn't journal every day or even every week, but I tried to record special moments and feelings. I even embarrassingly tried a doodle or two.

This is such a great book to give young adults, especially those who are longing for their first trip abroad. There are dated references, such as telegrams and third class cabins on boats, but the excitement and the anticipation of an 18-year-old girl going to Europe for the first time is the same. It's creative and imaginative in a way that posting pictures to Facebook will never be.

Something that people may find off-putting is that this book and the two upper class girls who wrote it are very much products of their time. When Lee meets a flirtatious man from Lebanon on the boat, she writes,

Jackie has warned me about the quirks in the sex lives of Near Easterners!!

The flip side to that, though, is that this book seems like a honest snapshot of the era, albeit from a very privileged perspective. When Lee and Jackie try to re-sell the cheap used car they bought, they meet with a lawyer-turned-missionary who says he doesn't want to pay much because "$5 could keep an African child alive for a month and every $5 he spent on himself meant one more would starve to death." The girls' response?

We were for slaughtering the whole tribe but his conscience would only let him starve 206 of them.

Definitely not something you picture coming out of the mouth of the future First Lady, right? I loved seeing the sarcastic side of a young Jackie, especially since the image that's ingrained in the history books is of a refined, proper figure -- not someone who'd say something so Jessica Darling. I love that nothing's been changed from the original 1951 scrapbook, not even the things that could've been viewed as politically incorrect when it was first published in 1974.

One Special Summer is a unique and colorful look into the lives of two sisters on the cusp of adulthood. The fact that one sister grew up to be one of America's most famous and guarded women makes the book even more special. This is one of my favorite books and, though out of print, definitely worth tracking down. If not at your local library, there are used copies on Amazon.

One Special Summer by Jacqueline and Lee Bouvier
Published April 11, 2006 by Rizzoli • Goodreads • Buy used on Amazon
Reviewed by Maggie: June 18, 2012
Posted by YA Anonymous at 3:51 AM