We're so excited to welcome Amy Spalding to Young Adult Anonymous to start her cover reveal tour for The Reece Malcolm List, her debut novel. It's one of the books we're anticipating most highly in 2013, and you know we love a pretty cover. Without further ado, here's Amy.

﻿Welcome to the blog tour for the exclusive cover reveal of The Reece Malcolm List, coming February 2013 from Entangled Teen! This post kicks off the series. Thanks so much to Maggie and everyone at Young Adult Anonymous for having me.

I’m pretty sure one of the things most writers worry about, once the book deal’s been finalized and the contract is signed and the Publishers Weekly announcement is out there, is their book cover. Yeah, yeah, we’ve been told our whole life not to figuratively or literally judge a book by its cover, but we do.

Book covers are important, right? Yes. They’re crazy important. I have picked up books I wouldn’t have otherwise because of their beautiful covers. I have avoided books I found out later were wonderful because of their heinous front covers. And I don’t like to speak for others but I’m gonna say most writers want our books to be in the former category, not the latter.

I’m really lucky to be at a small publisher like Entangled, because they take a lot of care to make sure a whiny and control-freakish author such as myself will be happy with the final product. I received a cover suggestion form almost immediately upon signing, and filled it out diligently, as well as spent loads of time looking for examples of other book covers I loved that would hit the same tone as I needed for my contemporary YA The Reece Malcolm List.

I also thought, hmmm, maybe I can just cut out the middle man and look directly for a great photo. I’m great with stock image sites! So I started looking, and before long, I found something amazing. I found something perfect. 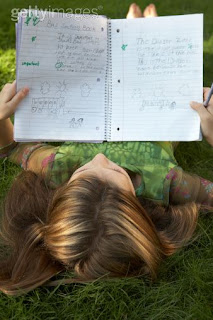 I loved everything about this. The titular Reece Malcolm List is something Devan, the book’s main character, keeps in a notepad. I could immediately imagine the title on this photo, imagine my name, even conjure up a hypothetical glowing blurb. But there were some serious issues, guys.

For one thing, this girl looks about thirteen, while Devan is sixteen. Also Devan is really into fashion. She’d never be caught dead in this outfit. Plus her hair is darker. Plus obviously she wouldn’t draw childish doodles. She would draw doodles related to the list or to her new school or to the musical she’s in AND OF COURSE to the boy she’s crushing on.

But I would not accept defeat! A plan began to solidify in my crazy little writer brain….

Find out all about my crazy plan tomorrow on GReads, and come back to Young Adult Anonymous on Wednesday, June 13, for an exclusive reveal of The Reece Malcolm List’s cover!
Amy Spalding grew up in St. Louis, but now lives in the better weather of Los Angeles. She received a B.A. in Advertising & Marketing Communications from Webster University, and currently works as the Digital Media Planner for an independent film advertising agency. Amy studied longform improv at the Upright Citizens Brigade Theatre, and can be seen performing around L.A. Her debut novel, The Reece Malcolm List, will be published by Entangled Teen in 2013, and combines many of her favorite things in life, including Stephen Sondheim and boys with great hair.