"In war, there are no unwounded soldiers."
- José Narosky


Something Like Normal is about a 19-year-old Marine who returns home after serving in Afghanistan for a year. Travis Stephenson is physically intact, but after spending a year on active duty and seeing his best friend get killed, his emotional scars manifest in a form of PTSD. Travis doesn't even feel like he's home because home to him is with his fellow Marines, not his parents' house in Florida where he never lived up to his father's expectations. He's also confronted by Harper Gray, a girl whose reputation got trashed after a little white lie Travis told when they were 13 years old got out of hand.

My biggest concern before reading Something Like Normal was whether a young adult book could accurately portray Marines. One of my favorite shows, HBO's Generation Kill based on the book by Evan Wright, set the standard with its raw, unflinching portrayal of Recon Marines stationed in Iraq. In Trish Doller's hands, my initial concern turned out to be moot. To use a Brad "Iceman" Colbert-ism, this book is pretty fucking ninja.

I love it when authors write about subjects they love. When Kirsty Eagar writes about surfing, her passion for it comes across the page and temporarily makes it my passion. Trish Doller loves Marines. Her affection for them is evident in her portrayal of these young soldiers and all the research that clearly went into making sure she did justice to their depiction. Though this story doesn't take place during battle, she gives us some insight into the conditions with her descriptions of the flea bites on the soldiers' legs and the sand that would get into every orifice. However, Doller's affection for Marines doesn't mean she turns them into saints. The passage that sold me on the book happens on page 10, when Travis talks about his motivations for enlisting. He says,


I didn't have a noble purpose in joining the Marines. I didn't do it to protect American freedom and I wasn't inspired to action by the 9/11 terrorist attacks. I was in grade school then, and the biggest priority in my life was any bell that signaled it was time to leave school. I enlisted mostly because I wanted to escape my dad, who'd made my life hell since I quit the football team at the end of sophomore season.

This isn't about politics or patriotism -- it's about people. And those are the stories that I care about. I care about Travis and the friends. I laughed at their nicknames for each other, like Solo, Kevlar, and Fido.

In addition to not turning them into saints, I love that she doesn't water down the dialogue by making it PC or PG. Forget soldiers, what 19-year-old male do you know who doesn't swear or say politically incorrect things? Dawson Leery doesn't count. These guys say "fuck" and they call each other "retards." And so do the guys I know. They also fuck around with girls.

This brings me to what doesn't work for me and why I'm giving the book 4 stars instead of 5. Doller's love of Marines doesn't affect her realistic portrayal of Travis, but perhaps it led her to create a perfect, unrealistic girl for him. Harper, though likable, doesn't seem believable. A guy responsible for ruining her reputation for YEARS -- to the point where even parents know about her -- comes back into town and after one token punch to the face, she starts to get over it? Maybe it's because I'm Korean and a Scorpio, but I don't get over shit that quickly, IF EVER. And if I only get ONE hit, it definitely ain't going to the face. I never sensed any real tension, even when Travis's ex-girlfriend comes into the picture. Sure, Harper gets mad but... not really. Maybe she was in love with Travis since middle school thus making it easier for her to forgive and forget, but then, that just makes me want to hit her in the face.

Still, all the other relationships in the book are so well done that my issue with Harper seems minor. Travis's developing relationship with his mother made me cry. The love and desperation the mother of a soldier feels is so palpable. I also really like the depiction of Travis's relationship with his brother, in that there isn't one. Travis's father, the ex-Green Bay Packer, raised his sons to compete against one another, often favoring one over the other. It's no surprise that the sibling relationship is contentious and broken. It also helps you understand why Travis considers his fellow Marines his true brothers.

This book will make you want to hug a Marine -- if Trish Doller hasn't gotten to them all. 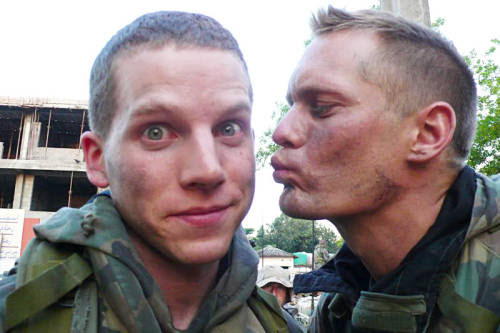 It allows you a look into the life of a guy, who happens to be a soldier. Stay frosty, it comes out next week.