Recap: An Evening with Markus Zusak at the Museum of Tolerance

I only found out about this event the day before and I am so glad I did because it was hands down one of the best book events I've been to. Get comfortable because it was also the one where I took the most notes. (Sidebar: After seeing how long it was, I put a recap of the recap at the bottom.) 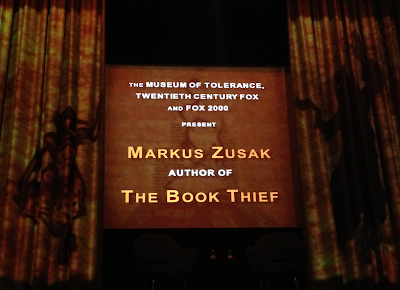 ETA: 30 minutes early! Not only that, Markus was in the lobby chatting with people. I was gearing up to talk to him when I remembered what my Australian friend, Anna, called him.

Guys, I couldn't stop laughing. Every time I regained my composure, I would lose it all over again. Wisely, my friend and I decided to just head into the auditorium.

Did you notice the curtains in the first picture? Movie money! I'm used to book events where the author's name is printed out on a piece of paper -- if that. From the venue to the presence of "guests of Twentieth Century Fox" taped over a row of seats, this was obviously a big event. We got a surprise later when they screened two scenes from the upcoming The Book Thief movie. Here is how the night was broken down:


Introduction:
Liebe Geft said that when this event went up on their website, they got calls from all over the world. She gave some facts about The Book Thief, like how it has spent over 230 weeks on the New York Times Best Seller List. When she described Markus as "the author of five renowned and important books," I saw Markus put his head down and sort of chuckle to himself.

Markus Zusak:
The first thing he said about Liebe's introduction was, "That was really nice." He then talked about his first signing in a town by the Margaret River. Nobody showed up. The librarian still made him do a reading and a guy sitting in the corner reading a fantasy book kept interrupting to give his opinion. His message to librarians: Don't make authors do that.

The Book Thief started in his backyard in Sydney. He's the youngest of four, and he and his older brother would often get in trouble. His mum swears a lot and his friends would come over to hear her swear with her German accent. He and his brother would come in from playing outside and his parents would randomly start telling them stories about Europe. They'd hear about bombings, people who didn't want to put out the Nazi flag on Hitler's birthday, and people who would give food to prisoners. One such person was a teenage boy who gave a piece of food to an old man who couldn't keep up on the march to Dachau. No one else came to the aid of this old man but the teenage boy did. Markus said, "That's why you can't underestimate teenagers." The old man fell to the boy's feet to thank him.

Q+A:
Q: Danielle asked him about this reaction to the trailer.
A: Markus said it was surreal because he "never thought it would be successful at all." He couldn't imagine people recommending it to their friends. How would they even describe it? That, though, took pressure off when he was writing. He watched the trailer about 40 times. "It's surreal and a real privilege."

Q: How to make the topic (Holocaust) accessible to an audience.
A: "You never want to be taking advantage of the theme. You have to make sure your heart is in the right place."

Q: How did you conceive Death as a personality?
A: "Hopefully it looks effortless but it was a nightmare." He wrote the first 200 pages quickly and then he stopped to redo it because it wasn't working. Death would say things like, "This is a story about a young girl. Do you like young girls? I do, but I like everybody." He felt like he had to take a shower after writing a page.

One thing he thought about was, "What if Death is actually afraid of us."

Q: What went into the idea that everybody suffers, including the ordinary Germans.
A: "Imagine waking up one day and being able to speak another language. That's what writing The Book Thief felt like. It was there for the taking." 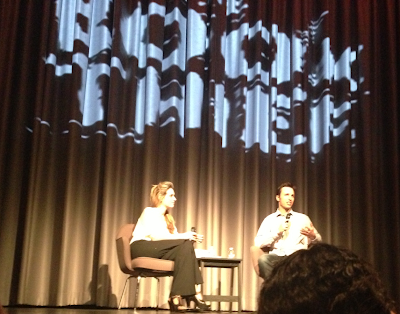 Q: The Book Thief is a book that celebrates books. What is so powerful about words and storytelling? Do you feel a responsibility when you're writing?
A: "The hardest question to ever answer is, 'What is your book about?' At the end of the day, what we are made of is stories." His parents came to Australia without a toothbrush but they had stories.

Q: Was there a religious or spiritual impulse guiding the hopeful worldview of book?
A: [Note: Someone turned on a mic somewhere and her voice interrupted his answer. His answer here follows the interruption.] "This is what happens when I'm talking about religion. This voice comes from nowhere."

Q (from the audience): His parents' reaction to the book.
A: Funny story first. He finished the manuscript in December 2004 and gave it to his mum and dad for Christmas. (Yes, he realizes the irony.) It had taken 3 years to finish after numerous interviews with his parents and his dad kept asking him when the book was going to be finished. A week after Christmas, he called his dad and finally asked him about the book since he hadn't mentioned anything about it. Markus asked if he read it and his dad said, "Yeah, yeah. I'm up to page 11." Markus said, "That's like a page and a half a day!" It turned out that his mum had read the manuscript first and then given it to his dad. When it came out in Germany, his dad read the German version. He then told Markus, "It's not so much that it's shit in English, but the German version is so much better." Another thing Markus's dad says to him: "Your books are doing well -- not like JK Rowling." Unsurprisingly, Markus says that everyone wants to meet his dad. Of his parents, he says that they bought so many books for their kids so they would be good in English, unlike them. They weren't only telling them about their lives but teaching him how to write. 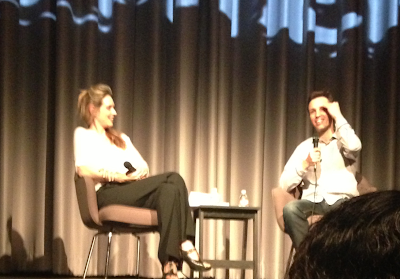 Q: Did he have a concern about the book being marketed as YA in the United States? (I recognized the person who asked this question but couldn't place him until later when I remembered he was the moderator at the Laini Taylor event at the Santa Monica Library.)
A: I loved Markus's answer to this. He said it was like going into a shop and trying on a great jacket and then coming out and seeing the same exact jacket in a different color. You don't know which one to get, but ultimately for him, he doesn't care about categories. He said, "My ambition is to write somebody's favorite book. Once a book is loved, it's a loved book." It doesn't matter what it's classified as. It sits on the top shelf with all the other most loved books. YA is a huge force in the US.

Q: "I noticed your use of foreshadowing wasn't very subtle."
A: He says he gets that a lot. That and, "You're an idiot." Another common one: "Congrats on the success of your book but I just couldn't get into it." One drunk guest at a wedding told him that seven times. However, he refers to something Death says in The Book Thief: "Mystery bores me, it chores me." Markus: "If I could get them to love these characters, they're going to read on no matter what." It was a risk but he wanted to do it that way. He loved Rudy the most and it really hurt him to do that to his character, and he wanted to prepare people. It just felt right to do it that way.

When it finally got to my turn, I told him some of the books were going back from whence they came to some Aussie friends. When he heard that, despite the fact that he'd been signing for over 30 minutes with at least 30 more to go, he took time to doodle something special. 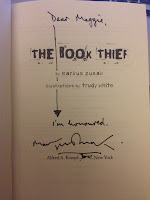 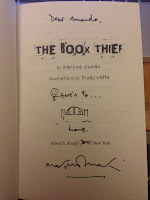 My thoughts:
I loved how diverse the crowd was. Not only were there people of all ages, these were people who were so passionate about the book and affected by it. The older lady sitting next to me told me before the event started that she never buys books, she just gets them from the library, but she HAD to buy this one.

Markus was so funny and charming. He understands the seriousness of the subject and has a tremendous respect for it, but he doesn't take himself too seriously. I love that he didn't consider being categorized from "Adult Fiction" in Australia to "Young Adult" in America to be a downgrade or anything to gnash his teeth about. His goal was and is simply "to write somebody's favorite book." Whether that's an adult or a teen doesn't matter. What he said about never underestimating teenagers really struck a chord with me and, I think, a lot of the teens in the audience. I especially enjoyed his stories about his parents. He said being German, they're not really touchy feely but after the book came out, he told them he loved them. His parents weren't fluent in English, but they made sure their kids were with all the books they bought them. This definitely made me think of my mom and the books she still offers to buy me if we happen to have lunch by a bookstore.

Basically, I came out of the event an even bigger fan of Markus Zusak (and his family!) and I can't wait to see The Book Thief in theaters.
Posted by YA Anonymous at 9:00 AM

Email ThisBlogThis!Share to TwitterShare to FacebookShare to Pinterest
Labels: 2013, Australian YA, Markus Zusak, YA in LA