Booking Forward: Sequels and Titles and Dates, Oh My!

That sound you hear is my belated squeal. While we were on our hiatus, we missed a lot of news. Two series are coming to an end in 2014 -- Daughter of Smoke and Bone and Dustlands. If you haven't read Days of Blood and Starlight yet, get on that. If you have, the title for Book 3 was revealed.

The title that caught my eye though is World After, or the LONG anticipated sequel to Angelfall by Susan Ee. Let me check my glasses because the release date says November 2013, as in 2 months from now. And there's a cover! 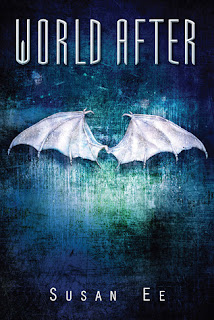 If I squeal, will I jinx it? Will the release date suddenly change to 2014 like it did with The Killing Woods by Lucy Christopher? Don't play with our emotions, publishers! Did we miss any other squeal-worthy news?
Posted by YA Anonymous at 10:00 AM