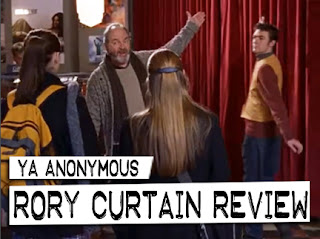 Behind the Rory Curtain: Where the smut hangs out in Stars Hollow (and YA Anonymous).

Rescue Me by Rachel Gibson
Reviewed by Maggie: October 5, 2012
Published May 29, 2012 by Avon
Goodreads • Buy on Amazon • Kindle • Book Depository

This is one of the most enjoyable romances I've read. It was funny, it was modern, and MOTHER OF GOD, it was HAWT. Navy SEAL Vince Haven is so hot, I ended up pumping my bestie, who was in the Navy until he was kicked out for being gay (fuckery), over dinner for info on just how swoon-worthy he should be. I am nothing if not thorough!

Me: Are Navy SEALs that hot?
Him: Oh yeah.
Me: Okay, how hot? Are they hotter than regular Navy guys?
Him: Hell yes. They look like elite athletes.
Me: There's a scene in the book where Vince picks up a sledgehammer with one hand and just tosses it aside. Real or not real?
Him: Real.
Me: Can you tell a Navy SEAL from regular Navy guys?
Him: Mags, I don't think you're understanding the ELITE ATHLETE part. For example, in the Navy, we did an exercise where we had to carry 40 pound weights in each hand and then stand on our tiptoes. Navy SEALs have to do that AND jump over a bench.
Me: drops fork
Server: drops mouth
Me: So... where do these SEALs hang out?


I had to ask. For the purposes of this review!

Sadie Hollowell is 3 things a woman from Lovett, Texas shouldn't be: 33 years old, single, and flat haired. She left Lovett at 18 and created a nice life for herself selling real estate in Phoenix. A younger cousin's wedding pulls her back to Texas.

Vince Haven is a 36 year old ex-SEAL who left the service after an incident in Afghanistan blew out 60% of his hearing in one ear. Since then, he's invested in businesses while traveling and taking care of his sister and nephew.

Sadie sees Vince stranded on the side of the road into Lovett and ends up reluctantly offering to help -- but not before demanding to see his license and calling his info into her assistant. You know, in case he ends up being a "homicidal maniac, or worse. A Democrat." Even my true blue heart giggled at this because Rachel Gibson sets the light tone early. There's a ton of banter between Sadie and Vince and Sadie and the colorful townspeople. Sadie and Vince find themselves thrown together, yada yada yada, and Vince ends up saying "Hooyah!" during sexytimes. I, along with Sadie, died laughing. There are more sexytimes, more laughs, and some emotional scenes.

One thing that really stood out about this book was how young and modern it felt. There's a Rachel Zoe reference! I usually loathe all reality shows, but I was literally* addicted to the first season of The Rachel Zoe Project. There's also a character named Becca Ramsey, who I choose to believe was a nod to the Baby-Sitters Club character.**

I also liked that Rescue Me was significantly shorter than my usual romance books. It was a fun, quick read.

I think fans of Shannon Stacey and Susan Elizabeth Phillips would like this book. I am definitely checking out more Rachel Gibson books and, ahem, more books featuring Navy SEALs. HOOYAH!

* That's a Rachel Zoe literally, ie, not literally.
** It totally wasn't a nod to the Baby-Sitters Club character.
Posted by YA Anonymous at 1:39 PM