Jaclyn Moriarty Came to LA & I Almost Forgot to Breathe: My Recap of the LA Times Festival of Books

Remember when I found out Jaclyn Moriarty was coming to LA for the Festival of Books and I almost passed out? That about sums up what happened when I actually did meet her.

I ended up only going on Saturday (April 20) because the Spurs were starting their series against the Lakers on Sunday. (The Spurs won so it was worth it.) Saturday was the day I cared about anyway since Jaclyn Moriarty and Elizabeth Wein were both on panels that day. I had a bit of a Sophie's Choice moment because Jaclyn's appearance at the Once Upon a Time Bookstore booth was at the same time as Elizabeth's panel, Young Adult Fiction: Danger & Determination. My friend, Vickie, and I decided to stake out the booth early and then hightail it over to the panel afterward.

Let me tell you how excited I was that day: I got up at 6am. And I am NOT a morning person. I'm also perpetually late to everything. This time, though, Vickie and I met up for coffee at 9 and then carpooled over to USC. We got to the booth 30 minutes early and looked around. I wasn't sure which books they would have in stock, so I brought a stack with me. I know from Nomes (Inkcrush) that Jaclyn doesn't do many events even in Australia so while I had this opportunity, I wanted to get some books signed for other fans as well. I knew they would have Corner of White in stock, but I was pleasantly surprised that they had The Year of Secret Assignments. There was only one copy in all the LA area B&Ns -- and I bought that one to gift the day before. 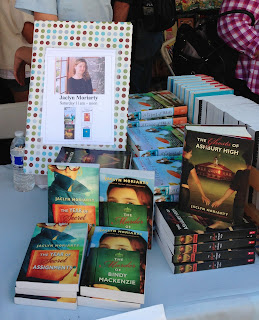 When Jaclyn finally showed up, I Wiig-ed out. I let the other people in line go before me so there would be less witnesses. Vickie actually went first. She's been a Moriarty fan ever since she first picked up Secret Assignments while in library school. It's the book she always recommends to her teens. When it was my turn, Lord help me, I don't know what I said. All I know is that I couldn't stop talking. I like to think that her smile was of bemusement and not, you know, fear. Once I got somewhat coherent, she noticed that I had a copy of the Australian edition of Secret Assignments, Finding Cassie Crazy. I think I blurted out "Frying pan!" before explaining that Nomes mentioned her favorite line of the book, which I didn't recognize because it had been edited in the US version. She said she doesn't do many events but it was lovely that she had so many fans in the States. I asked her about the sequel to A Corner of White because THAT ENDING, and she said the second book is already written and she thinks it will be published in Australia at the end of this year or early next year. It's all up to the publisher. (This year please, Pan Macmillan Australia!)

After talking her ear off while grinning like a fool, Vickie and I dashed off to Elizabeth Wein's panel. Well, first I dropped my Fuji Instax camera because my bag was overflowing with books and someone from Scholastic very kindly stopped me. This is when I remembered that I needed to breathe between bouts of verbal diarrhea and fangirling, so we took a minute to stop in the shade. After that, we were off again. 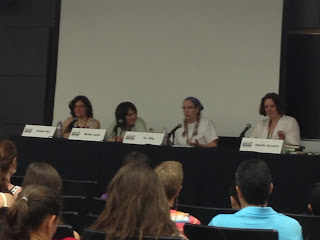 The Danger & Determination panel consisted of Elizabeth Wein, A.S. King and Martine Leavitt. I had never heard of Leavitt before but Vickie is a huge fan of her books, especially Keturah and Lord Death. Another of Leavitt's books, My Book of Life by Angel, was nominated for the LA Times Book Prize for Young Adult Literature. Code Name Verity and Ask the Passengers were also nominated, with Ask the Passengers winning the prize. We missed a lot of the panel but got there in time for the Q&A.

After the panel, there was a signing outside. If you look through this thread, you'll see that I was tasked with getting a book signed from Elizabeth "Queen of My Shattered Heart" Wein. Warning for BEA attendees: Elizabeth's line was jam packed. There were at least 20 people in front of me and more people kept showing up. We were told to stick a post-it on the title page and one on page 68. Verity fans, you know why. I saw someone in line who had first editions of her Lion Hunters series and let me tell you, I was tempted to grab and run. When my turn came up, I was much calmer than an hour earlier, having learned my lesson. Elizabeth, like Jaclyn, was wonderful. There's always that fear when you meet an author you love that the experience won't live up to the one you've imagined in your mind. My expectations that day were met and exceeded. Elizabeth remembered our Twitter conversation and signed the books accordingly. She also immediately recognized Chachic's name, as Chachic (Chachic's Book Nook) was an early fan and bibliovangelist of her books. Mandee (Vegan YA Nerds), Anna (I Am Here for This), and I had joked about buying these bracelets for one another, so I noticed that Elizabeth also had a similar bracelet. She said her best friend surprised her with it... after she had already bought one for herself.

We had a thirty minute break and decided to rest a bit before heading to Jaclyn's panel, Writing for Teens & Tweens: Sagas & Series. 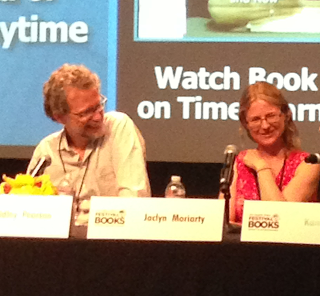 Have I mentioned how wonderful Jaclyn is already? I love that the moderator knew it too. As she went through Jaclyn's CV (Yale, Cambridge), everyone was a bit awestruck, but Jaclyn demurred that it was all an excuse to put off actually having to practice law. While attending Cambridge, she wrote Feeling Sorry for Celia and made a secret pact with herself to get published before she left London. She sent Celia out to a bunch of publishers but was rejected each time. When her visa ran out and she still hadn't been published, it turned out that "a secret pact with yourself isn't a valid reason to extend your visa." She returned to Sydney and started working in a law firm. She decided to try finding a publisher one last time. She sent her manuscript off and it ended up in the hands of Garth Nix, author of Sabriel. This led to her finding a publisher. The Ashbury/Brookfield books were "an accidental series." After she wrote Finding Cassie Crazy, her sister was the one who wanted to know more about one of the minor characters, Bindy. This led to The Murder of Bindy Mackenzie.

Speaking of her sisters, when Jaclyn was 8, she used to write stories. Her younger sister asked her how she came up with them, and Jaclyn told her that there were little fairies under her pillow who told her the stories. When her sister said that she didn't have any fairies, Jaclyn replied that it was because her sister had dark hair whereas she was a blonde. Haha!

When asked about writing YA, Jaclyn said that she loves children's books for "the imaginative freedom and the imaginative range." She likes adult books because they deal with serious issues. Young adult is a good mix of both. On writing fantasy, Jaclyn said, "What's important is for us (authors) to believe what we're writing."

She discussed A Corner of White and how she started writing in wintry Montreal, Canada. She said, "Being from Sydney, snow is the most magical thing." On naming the kingdom of Cello, she said that in her research, she found out that the cello is the instrument closest to the human voice. As part of her research, she also bought a cello off eBay and started taking lessons with a "beautiful Polish cellist."

There were some other great topics and Ridley Pearson was also an interesting panelist, but unfortunately, the panel was nearly overshadowed by another participant whose behavior was boorish, disrespectful, and unprofessional. I won't name names because I don't want my fantastic experience with one of my favorite authors to be about someone who is neither. Jaclyn Moriarty, the person who I came to see, was delightful, intelligent, and charming. I'm glad I went to see her earlier in the day because after the panel, I was LIVID.

I will say this: If you're an author on a panel, it's not just about you. Not only are there other authors, there are people in the audience who specifically want to hear those authors. Give them some respect and don't interrupt or YELL OVER THEM. I wish I was kidding.

Anyway, these are the books I was lucky to get signed for myself. 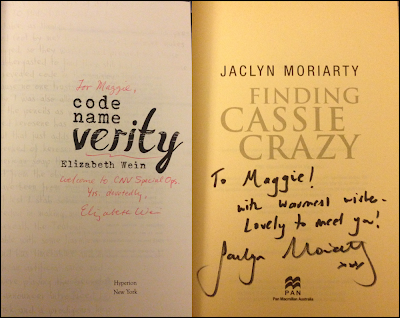 If you ever have the opportunity to hear or meet Jaclyn Moriarty or Elizabeth Wein, RUN. And don't forget to breathe.
Posted by YA Anonymous at 5:00 AM