Remember the Britney and Justin Dance Off of 2002? (And Matt Damon's reenactment on SNL?) This book is the literary equivalent of that. Yes, it's as awesome as it sounds.

Joel and Cat, classmates and enemies, are paired together for a tandem writing project. They have to write a story one alternating paragraph at a time. But the first rule of tandem story writing is that you do not talk about tandem story writing. They can't discuss the plot or characters. Any problems? Take it to the page! (Sidenote: No wonder Australian YA is awesome -- their English teachers kick ass. Mr. Ashton reminded me a bit of Mr. Botherit and his Joy of the Envelope.)

The 'enemies who are forced to work together' is one of my favorite tropes. Done well, it leads to great chemistry and banter, and the reader falls in love along with the characters. You already know how I feel about Rebecca Sparrow. (In case you don't, I ADORE her.) There's just something about her writing that I connected to immediately and I loved Nick McGowan from the first page. Imagine my surprise when I didn't connect to Joel and Cat right away. I don't get it. Did I stumble into bad lighting? I put the book down after about 40 pages. A few days later, I decided to pick it up again, and this time, I couldn't put it down until I was done. I didn't stop laughing until a good 30 minutes after I had finished the book. I think the beginning felt a bit disjointed as the characters, the authors, and I got used to the tandem style. Once we were all on the same page (hardy har har), it was so much fun. It's obvious that Rebecca Sparrow and Nick Earls had fun writing this. I can't even mention a scene without cackling like Julia Roberts and wanting to spoiler the hell out of it for you so we can laugh about it together, but I won't!

There's a distinctly Australian feel to the book. I had to google references to Megan Gale, Andrew G, and Mary Kostakidis. I cracked up after looking up 'Ken Done scarf', which is how Cat describes Joel's hippy dippy mother's appearance, because that's exactly how I pictured her. I was surprised that Australia has Sizzlers. Of all the restaurants America could export! There are still a few around LA -- to keep people like my grandma happy. I loved that Sizzler was also a turning point in the book. Seriously, so much fun!

If Sizzler doesn't tempt you to read this book, maybe Cat's dad will. Remember that episode of Friends where Ross goes tanning? "I'm an 8!" Cat's dad takes that as a personal challenge. 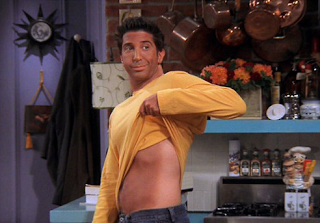 When Joel and Cat are first paired up, Joel throws down the gauntlet and challenges Cat with two words: Amaze me. Nick Earls and Rebecca Sparrow did. They each bring such a charming, unique voice to the story. I'm no Nate Silver, but I predict you will laugh your ass off while reading this book.