I don't get to say this nearly enough in my reviews, so I'm going to caps lock it: THIS BOOK IS SO MUCH FUN! As much as I like Hold Me Closer, Necromancer, Necromancing the Stone is even better. Not only is it more streamlined with the focus primarily on Sam, but Lish McBride fully embraces the camp.

*Jack Bauer voice* The following takes place 6 weeks after Necromancer. Sam has gone from lowly burger flipper to Head Necromancer In Charge (HNIC). He's inherited all the property of the former HNIC, Douglas, including a shapeshifting manservant, an army of mischievous gnomes, and a minotaur. (You can shut up about your Hulk, Tony Stark!) Brid is still firmly in the picture, along with her pack, who have been helping Sam train. However, just as Sam starts to settle into his new normal, a murder throws the supernatural world into upheaval.

With this book, Sam LaCroix has become one of my favorite male YA characters. He actually reminds me of another of my favorite boys -- Ed from Graffiti Moon. Like Ed, Sam is a decent, good guy. He's not particularly smooth with the ladies, and he doesn't go chest to chest with the guys either. When his fight-or-flight instinct kicks in while training with Brid's brothers, he wisely chooses flight. However, he's not an overly sensitive, poetic soul either. He's just normal... well, aside from the whole raising the dead thing. He's also sarcastic, nice, and loyal.

As much as I love a good hero, I really love a good villain. The villain in Necromancing the Stone is so great because not only does he embrace his role, he savors it. He's like Russell Edgington. 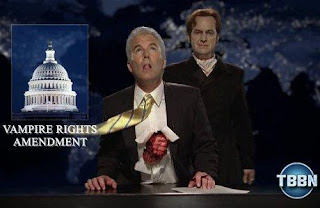 This book is a witty, snarky, pop culture feast. If there's a joke or pun to be made, McBride makes it. (Were-bears care!) If gnomes named Gnomie Malone, Gnome ChompSky, and The Darkness Known as Mittens don't convince you to read this book, how about a reference to this picture: 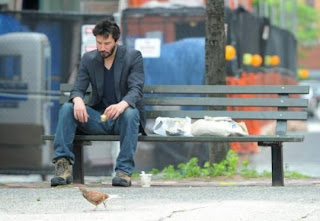 Yes, people. SAD KEANU! Need I say more? Okay, I'll say one more thing. Along with the puns and jokes, McBride sneaks in a message about friendship and family that is unexpectedly touching. Necromancing the Stone exceeded all my expectations. I highly recommend it and I hope there are more books in this series.


I received an ARC of this book from the publisher.
Posted by YA Anonymous at 12:18 PM