Are you tired? Rundown? Listless? Do you poop out in the middle of a book -- even one you're really enjoying?

Try CINDER. It will bust you out of your reading slump. And Prince Kai is so tasty too! 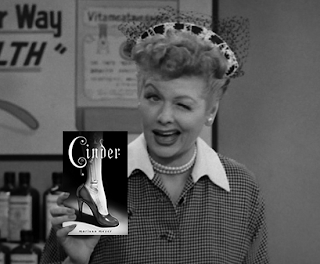 I don't know whether I hit the rookie reviewing wall, but I haven't written a review since... November 15?! Don't get me wrong, I've been reading (and taking notes while I read) but that's it. With Cinder, I didn't take any notes or make any highlights. I just read... and read... and enjoyed the hell out of this book.

Cinder is a cyborg mechanic living in a futuristic New Beijing. She has to work to support her stepmother and two stepsisters. Her stepmother, resentful at being forced to take her in, refuses to buy Cinder a new mechanical foot so she's stuck with the little one from when she was 11 years old. Already, I love this take on Cinderella. Cinder may be the ward of her stepmother, but she's also a feisty, badass mechanic, a la Mercy Thompson. She meets the heir to the throne, Prince Kaito, when he comes to her booth to get his android fixed. Kai's father, the Emperor, is dying of letumosis, an incurable disease that has already taken the life of his mother and many people around the world. As if the letumosis plague wasn't enough, there is the constant threat from Queen Levana, the powerful Lunar queen who has mind altering abilities.

Basically, this book has a little bit of everything -- action, political intrigue, romance, science fiction, and fantasy. Since it's a retelling of a well known story, the plot is fairly predictable. This isn't Sherlock (one of the many shows I watched in its entirety during my book slump -- what up, Cumberbitches!), where the plot is driven by its mystery. Rather it's the creativeness and freshness of Marissa Meyer's writing that kept me interested in the story. The Cinderella story is the roadmap, but Meyer blazed a completely different and unique trail to take us up to the stroke of midnight. I had so much fun reading this book and her wink wink nudge nudge references to Rapunzel and future characters in this series.

Did I mention this book is set in Asia with a hot Asian prince? Seriously, it's so nice to be able to reference a hot Asian male character other than freakin' Shang from Mulan. So help me God, movie studios, if you cast Jackson Rathbone as Kai, I will throw shit! I pictured a young Takeshi Kaneshiro as Kai. For the androids, I pictured Rosie from The Jetsons.

If you haven't read this already, you should join the thousands of happy, peppy readers and get a copy of Cinder tomorrow. Hi, Fred! Hi, Ethel!

Bonus! To help you out of your slump, Macmillan kindly provided a clip from the audiobook. Listen to the entire first chapter here. Available for purchase at Amazon.
Posted by YA Anonymous at 3:36 AM